Urban School Decentralization and the Growth of "Portfolio Districts"

In the latter half of the past decade, school districts in several large cities, including New York, Chicago, Washington, D.C., and post-Katrina New Orleans, have implemented an urban school decentralization model generally known as "portfolio districts." Others, including those in Denver and Cleveland, are following suit in what appears to be a growing trend. The portfolio strategy has become increasingly prominent in educational policy circles, think tank and philanthropy literature, and education news reporting. As CEO of the Chicago Public Schools, Arne Duncan embraced the portfolio district model. His appointment as U.S. Secretary of Education suggests the Obama administration also supports the approach. The premise of the portfolio strategy is that if superintendents build portfolios of schools that encompass a variety of educational approaches offered by different vendors, then over time school districts will weed out under-performing approaches and vendors; as a result, more children will have more opportunities for academic success. This brief examines the available evidence for the viability of this premise and the proposals that flow from it.

The portfolio district approach merges four strategies: 1) decentralization; 2) charter school expansion; 3) reconstituting/closing "failing" schools; and 4) test-based accountability. Additionally, portfolio district restructuring often involves firing an underperforming school's staff in its entirety, whether or not the school is reconstituted as a charter school. In this model, the portfolio district is conceptualized as a circuit of "continuous improvement." Schools are assessed based on test scores; if their scores are low, they are subject to being closed and reopened as charters. The replacement charters are subsequently subject to test-based assessment and, if scores remain disappointing, to possible closure and replacement by still other contractors. The portfolio district concept implements what has been since the 1990's discussed in educational policy literature as market-based "creative destruction" or "churn."1 This perspective considers public schools to be comparable to private enterprise, with competition a key element to success. Just as businesses that cannot turn sufficient profit, schools that cannot produce test scores higher than competitors' must be "allowed" to "go out of business." The appeal of the portfolio district strategy is that it appears to offer an approach sufficiently radical to address longstanding and intractable problems in public schools.

Although the strategy is being advocated by some policy centers, implemented by some large urban districts, and promoted by the education reforms proposed as part of the Obama administrations Race to the Top initiative, no peer-reviewed studies of portfolio districts exist, meaning that no reliable empirical evidence about portfolio effects is available that supports either the implementation or rejection of the portfolio district reform model. Nor is such evidence likely to be forthcoming. Even advocates acknowledge the enormous difficulty of designing credible empirical studies to determine how the portfolio approach affects student achievement and other outcomes. There are anecdotal reports of achievement gains in one portfolio district, New Orleans. The New Orleans results, however, have been subjected to serious challenge. Extrapolation of research on the constituent elements of the model is not helpful because of the complex interactions of these elements within the portfolio model. Moreover, even when the constituent elements are considered as a way to predict the likely success of the model, no evidence is found to suggest that it will produce gains in either achievement or fiscal efficiency. Finally, the policy writing of supporters of the portfolio model suggests that the approach is expensive to implement and may have negative effects on student achievement.

In light of these considerations, it is recommended that policymakers and administrators use caution in considering the portfolio district approach. It is also highly recommended that before adopting such a strategy, decision makers ask the following questions. 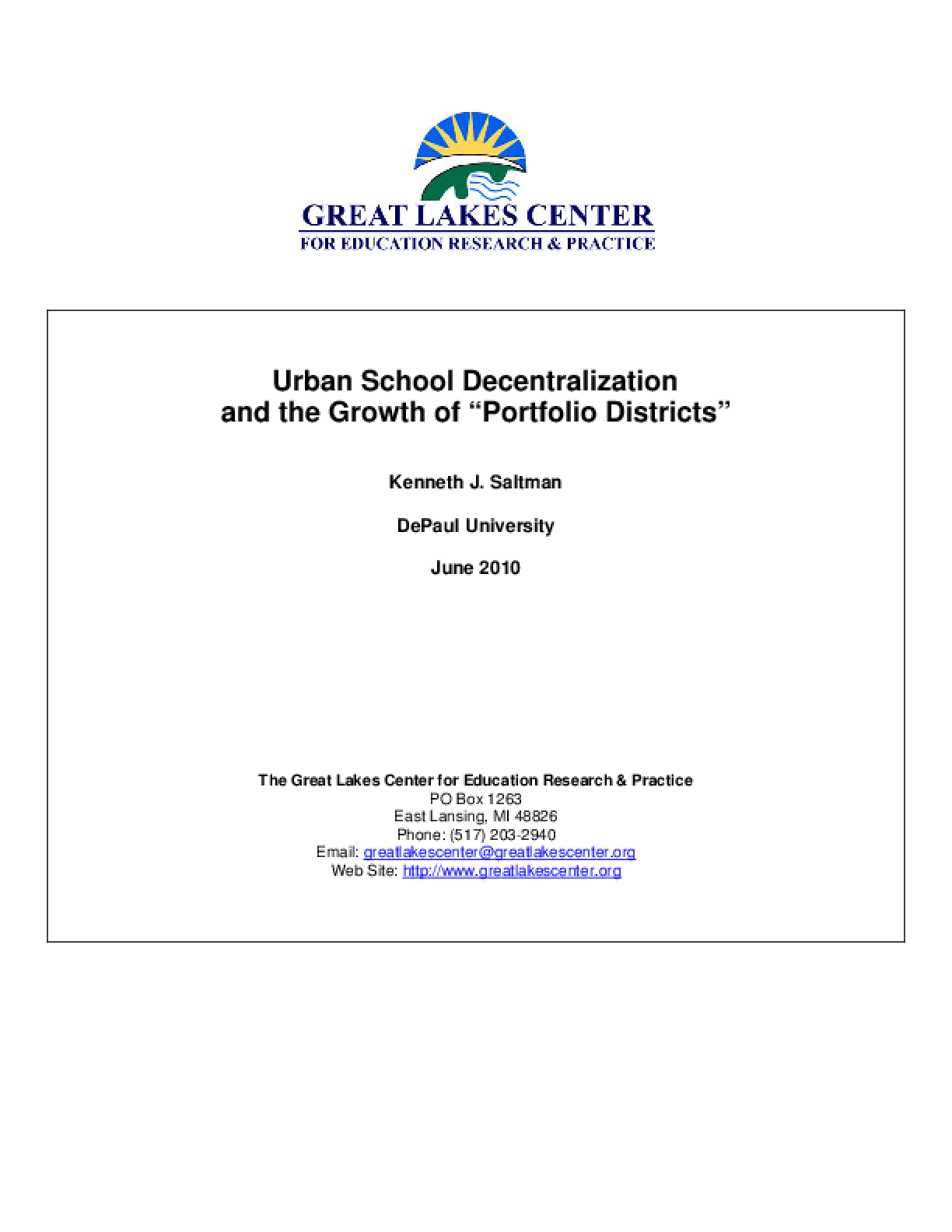