In a single month, as many as 6,400 to 12,500 people visit each of the busiest of the Illinois Department of Human Services (IDHS) local offices. Since welfare reform in 1996, TANF caseloads in Illinois have declined precipitously. In the midst of the current economic recession with its attendant high levels of unemployment, Illinois ranks first in the United States with a reduction in its TANF caseload of 39.5% for period March 2001 to March 2003. 1 However, reductions in TANF caseload do not mean that the number of eligible families in need of assistance is declining.2 Nor do they mean that the workload of local offices has been decreasing at the same rate as TANF caseloads. On the contrary, welfare reform policies have made the management of the remaining TANF caseload a time consuming and labor intensive process. As of August 2003 for the five local offices in this study, caseworker staffing was 23.7% less than the allocated level and supervisor staffing was 28.6% less than allocated. These staff reductions resulting in caseloads in Cook County offices as high as 700 to 1,200 per caseworker negatively impact the kind of service that families encounter when they try to apply for and retain benefits. Commenting on the critical shortage of staff, one Cook County Local Office Administrator said, "I've been around a long time and it's very bad now. There are long lines and long waits. The volume is very detrimental to providing efficient services." Over the past two years, members of community-based organizations and advocacy groups have expressed concern about the increasing number of reports of problems facing people who go to Chicago area IDHS offices for public benefits such as Food Stamps, Medicaid, and TANF. For example, the volume of calls to the Public Benefits Hotline has increased from 7,054 calls for the period August 2001 through July 2002 to 8,418 calls for the period of August 2002 through July 2003. During 2003, call volume has continued to expand, with 43% more calls in August 2003 than in January 2003. In response to the need for current data about customer service in IDHS offices, CIR collaborated with community human services agencies and advocacy organizations in conducting a one-day survey to document the experiences of customers in five of the busiest local IDHS offices in Cook County. IDHS assisted with logistics, instructing local offices to allow CIR to conduct the survey in the waiting areas. Working group members conferred on research design and survey development, attended training in survey administration, and participated in administering the survey. Working group members also participated in discussions to interpret research findings and develop policy recommendations. Although the scope of the survey is limited -- information about 199 customers in 5 offices on one day in July 2003 -- the findings offer important indicators of strengths and weaknesses in service delivery. These findings are being used to inform stakeholders such as elected officials, state agencies, community leaders and organizations, and the media about the quality of service delivery. 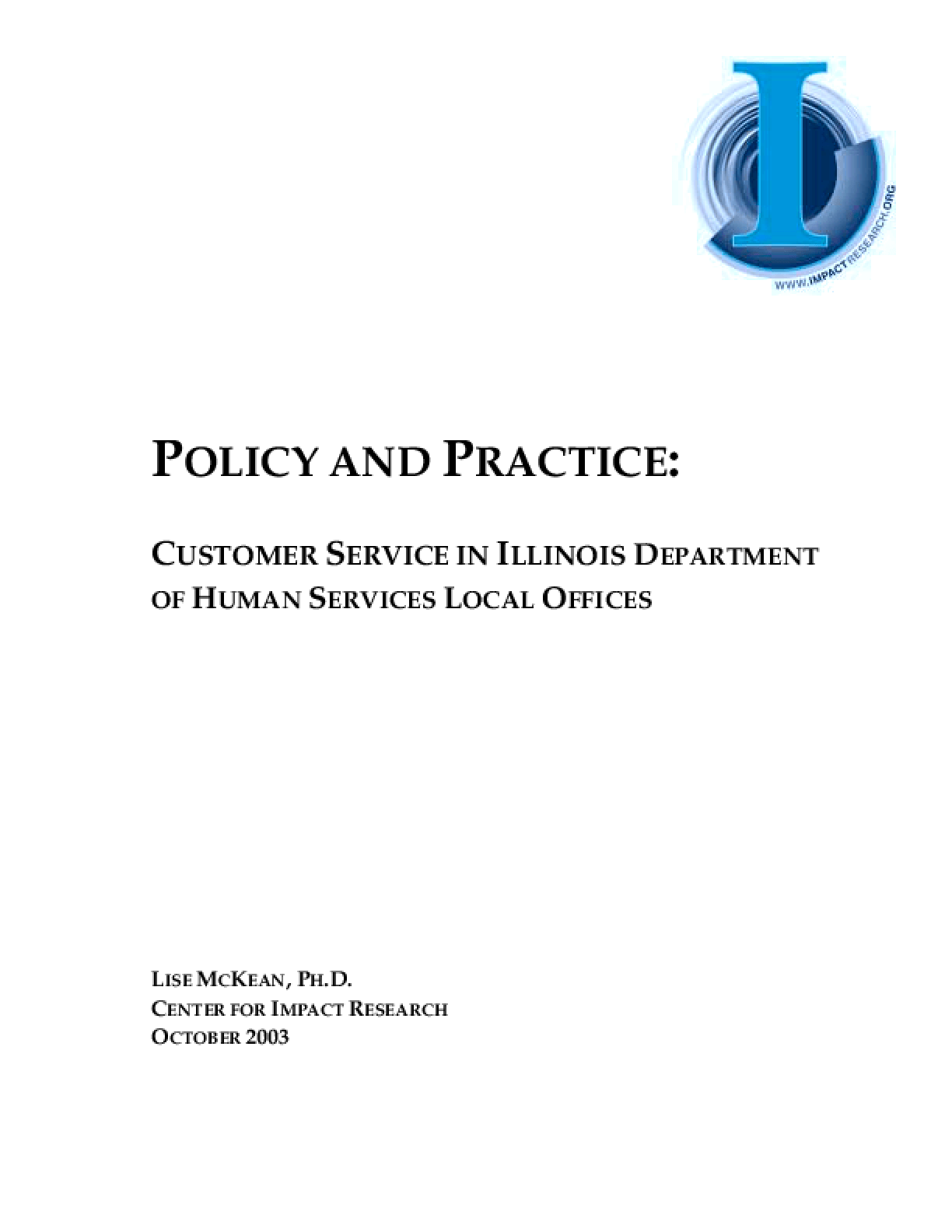