Research Toward a Cure and Immune-Based and Gene Therapies

Once again, Richard Jefferys effortlessly guides us through the challenging landscape of "Research Toward a Cure and Immune-Based and Gene Therapies."

HIV cure research is now acknowledged as a central goal of U.S. NIH-funded AIDS research.  Meanwhile, it is expected that the currently-underway renewal of the Martin Delaney Cure Collaboratories may result in the funding of five or six consortia compared with the current three. amfAR has established a new Institute for HIV Cure Research at U.C. San Francisco.

In Durban the International AIDS Society expects to release an updated global scientific strategy towards an HIV-1 cure.

Currently ongoing and planned cure-related clinical trials are not expected to lead directly to a cure, but rather to define pathways which when further developed and possibly combined may lead to sterilizing or functional cure. The only possible exception to this would be if researchers were able to replicate the one documented case of a cure for HIV-1 in a human being, the case of Timothy Brown. This approach would involve giving stem-cell or bone marrow transplants from a CCR5-delta32 homozygous mutant immune system to an HIV-infected person whose cancer therapy requires such a transplant.

According to Jefferys, "at least six individuals have since been reported who underwent similar procedures, but all of them died due to either the underlying cancers or complications from the transplantation procedure. One new case was described in a poster at the 2016 Conference on Retroviruses and Opportunistic Infections (CROI), and the preliminary signs appear encouraging: the cancer is in remission and HIV cannot be detected by multiple techniques. However ART had not yet been interrupted at the time of the presentation, so it is too early to know if this may represent a second example of an HIV cure."

Research on putative immune-based therapies for HIV infection seems to be in decline, aside from a few studies such as one of pitavastatin to reduce cardiovascular disease incidence among people on ART.

However there is still a clinical need for therapies for people who in spite of successful virologic suppression on ART fail to reconstitute their immune systems to healthy and safe levels. Late initiation of ART – simultaneous with the diagnosis of AIDS, as is the case with 23.6% of newly-diagnosed HIV in the U.S. as recently as 2013) – greatly increases the risk of becoming an immunologic non-responder (INR). Jefferys states that "TAG is currently collaborating with other activists to explore whether candidate treatments for INRs might be considered orphan drugs, a U.S. Food and Drug Administration (FDA) designation intended to spur the development of treatments for disorders that are relatively rare."

The 2016 immune-based therapy pipeline (see table 2) includes fifteen agents with a broad variety of putative therapeutic mechanisms; all are languishing or at best moving forward slowly in phase I or II studies. 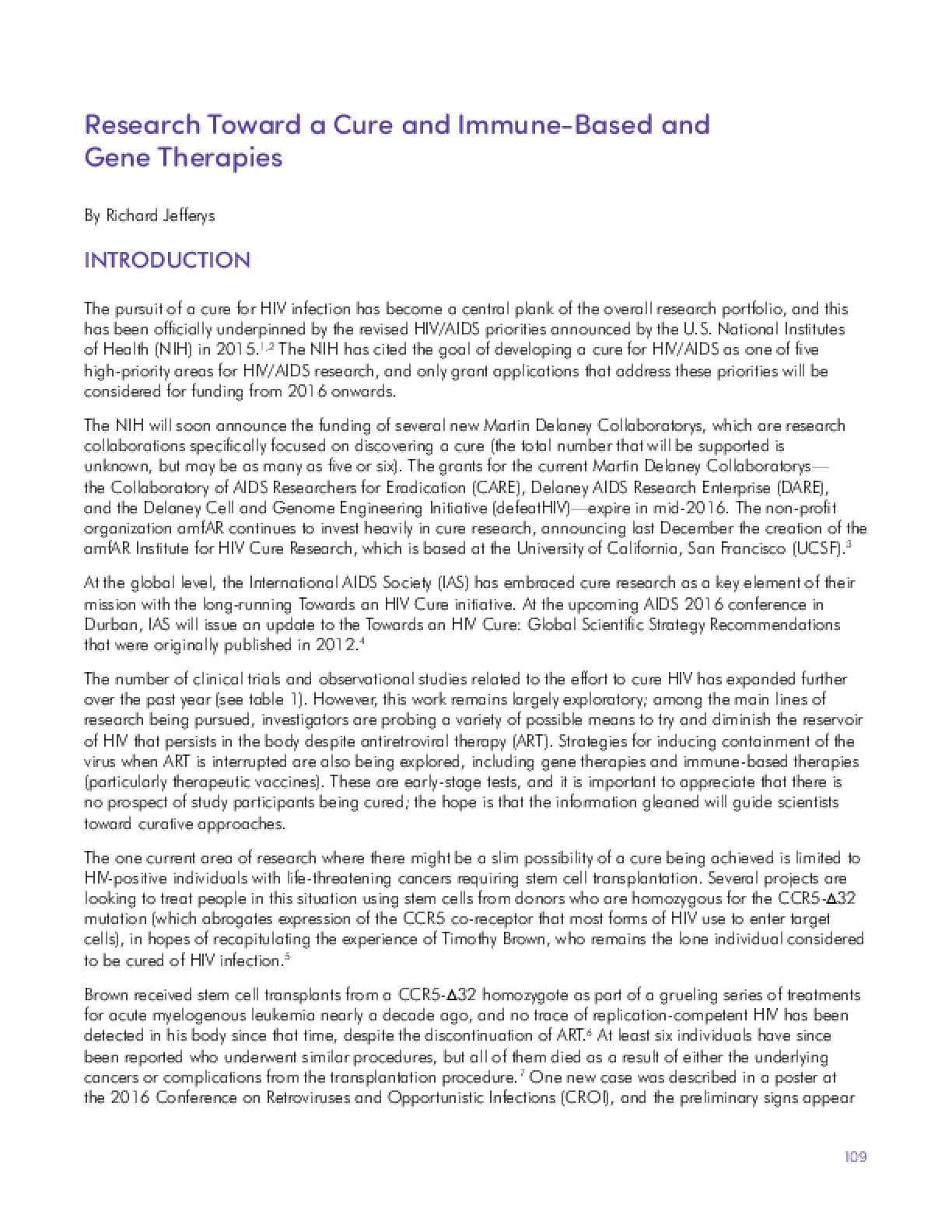