Over the past decade, several new options for improving TB diagnosis have become available. The past year saw considerably more progress than the previous one. However, the reality of how most TB is diagnosed -- or not -- remains largely unchanged. The world failed to detect 3.6 million of the estimated 9.6 million new cases of TB in 2014. Sputum smear microscopy -- which misses over half of TB cases and gives no indication of drug susceptibility to guide appropriate treatment -- is still the diagnostic standard in most of the world, despite the availability of the far more sensitive GeneXpert MTB/RIF for six years. Late in 2015, the World Health Organization (WHO) approved Alere's TB lipoarabinomannan (LAM) test -- a very affordable, simple, rapid, noninvasive, point-of-care (POC) rule-in test for people with HIV with very low CD4 counts -- but no country has begun to implement it yet. New versions of line probe assays -- Hain's MTBDRplus and MTBDRsl and a product from Nipro -- received WHO recommendation, facilitating rapid drug susceptibility testing (DST), but the world is still a long way from universal DST, with an estimated 59 percent of cases of multidrugresistant TB (MDR-TB) undetected.

Research and development (R&D) for TB diagnostics features some promising developments since last year (see table 1). Improvements on nucleic acid amplification tests (NAATs) such as GeneXpert Omni and Ultra and Molbio's TrueNAT are being validated, positioning them for possible WHO recommendation. Further upstream, encouraging research into gene sets that can predict active TB disease and reliably distinguish it from latent TB and other infections may eventually underpin new blood tests (currently, there is no effective serological test for active TB). Incremental advances are being made to improve detection of pediatric TB (see "Extending quality," page 133).

Yet, overall, with a mere US$65 million in 2014 funding out of an estimated annual need of $340 million, the pipeline for evidence-based new diagnostics has largely remained stagnant (see table 2). Dismayingly, some companies continue to move forward with marketing for their products when the data are unavailable or scream that they should not, as is the case with Epistem, which is marketing GeneDrive in India despite the test's having flopped in studies.

With use of poor tests predominating, poor uptake of good extant options, poor evidence bases to support the introduction of new tests, and poor funding to support the development of better tests, it's no wonder we've made little headway in diagnosing TB. 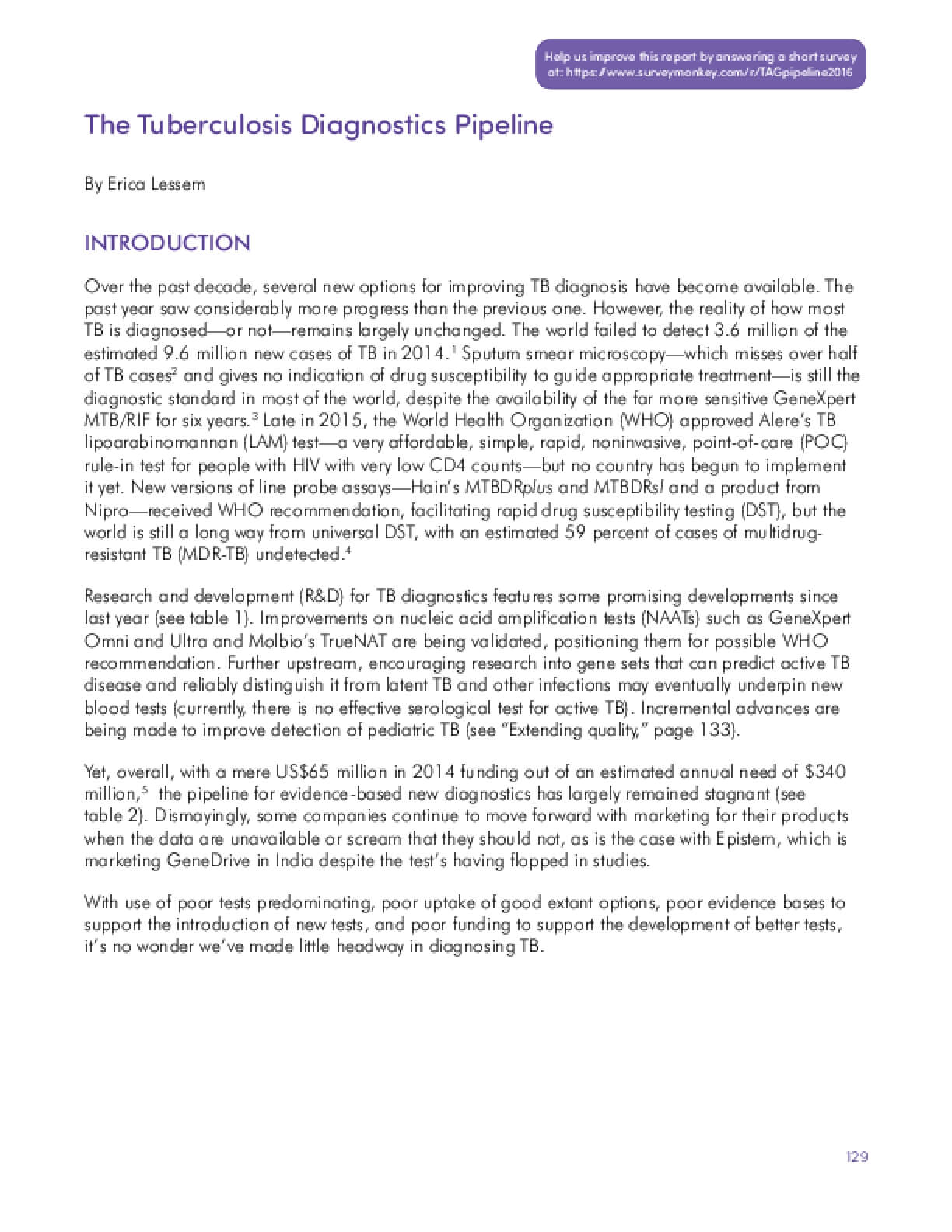