After decades of receiving short shrift from most national TB programs and international organizations, tuberculosis (TB) prevention is finally coming into the mainstream. In 2015, the World Health Organization (WHO) published its first-ever Guidelines on the Management of Latent Tuberculosis Infection. The launch of these guidelines has awakened countries and donors to the idea that TB prevention is an area ripe for intervention -- and for intensified research. In March 2016, the executive board of the global health financing mechanism UNITAID endorsed TB prevention as one of three "areas for intervention" that should be prioritized for targeted investments in its TB portfolio. This support will likely include funding for research projects seeking to shorten and simplify preventive therapy for the groups that are most at risk of developing active TB disease: children and people with HIV. On the other side of the Atlantic, the U.S. White House's National Action Plan for Combatting Multidrug-Resistant Tuberculosis lists TB prevention -- specifically, "increasing options for preventing active TB, latent TB infection, and TB transmission" -- as the first objective toward its goal of accelerating basic and applied research to overcome the threat of drug resistance.

As exemplified by these new guidelines and plans, a more focused TB prevention research agenda is beginning to take shape. This agenda involves tackling TB infection from two angles. First, preventive therapy is used to keep asymptomatic infection with Mycobacterium tuberculosis (MTB) from progressing to active, symptomatic TB disease. Second, vaccination is administered either pre-exposure to prevent infection with MTB altogether, or post-exposure to prevent infection from developing into disease. To date, research and development (R&D) on TB preventive therapies and vaccines have progressed with little interaction, despite the common goal of using new preventive therapies and vaccines to greatly hasten the decline in TB incidence by reducing the number of people with MTB infection who may one day develop transmissible disease. Indeed, mathematical modeling shows that the dramatic reductions in TB incidence required to meet the TB elimination targets of the WHO's End TB Strategy will require addressing TB infection -- first through preventive therapy and then through vaccination.

To acknowledge the momentum building behind TB prevention as a unified field of research, this year's Pipeline Report jointly reviews progress in the clinical development of TB preventive therapy and TB vaccines. (Advances in infection control -- the administrative, environmental, and personal protective measures that reduce the risk of TB transmission in the built environment -- fall outside of the biomedical focus of this chapter.) There is much to be gained from breaking the habitual thinking that has placed TB drug development in one camp and vaccines in another. For one, a joint discussion reveals that initiatives to develop new TB preventive therapies and vaccines face a shared thicket of thorny scientific issues, whose lack of resolution has snarled progress toward both ends. Approaching TB preventive therapy and vaccines as related endeavors may also jumpstart an advocacy movement for TB prevention that is more forceful than disjointed efforts to hold public and political attention on separate technological fixes (an approach that can sometimes be misinterpreted by politicians as an either/or choice between treatment and prevention). Finally, prevention research raises a number of unique ethical considerations, with corresponding implications for engaging communities in TB research that both drug and vaccine developers will need to address. 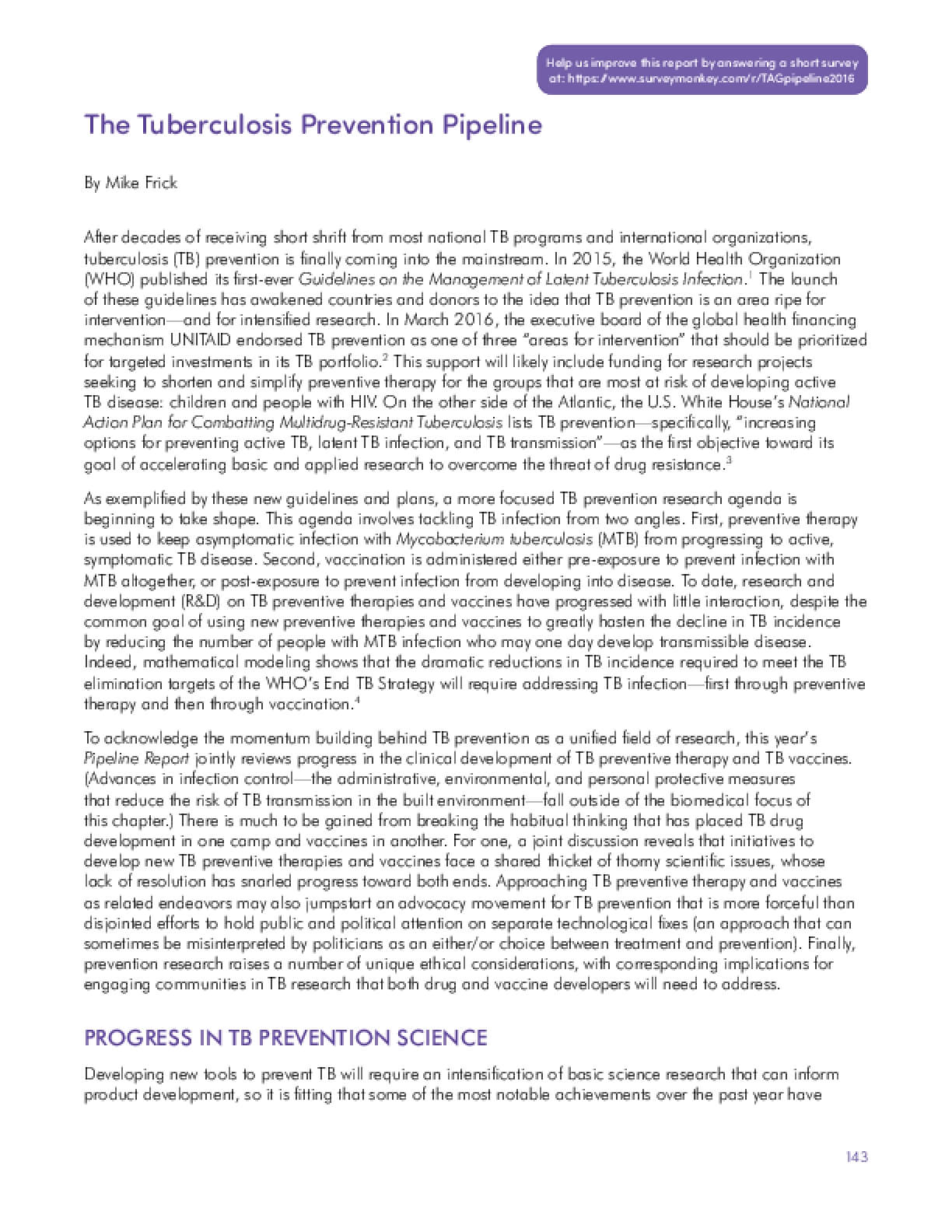