What Can the United States Learn from the Nordic Model?

Some policymakers in the United States and Europe argue that it is possible to enjoy economic growth and also have a large welfare state. These advocates for bigger government claim that the socalled Nordic Model offers the best of both worlds.

This claim does not withstand scrutiny. Economic performance in Nordic nations is lagging, and excessive government is the most likely explanation. The public sector in Sweden, Denmark, Norway, Finland, and Iceland consumes, on average, more than 48 percent of economic output. Total government outlays in the United States, by contrast, are less than 37 percent of gross domestic product. Revenue comparisons are even more striking. Tax receipts average more than 45 percent of GDP in Nordic nations, a full 20 percentage points higher than the aggregate tax burden in the United States.

This bigger burden of government hurts Nordic competitiveness, both because government spending consumes resources that could be more efficiently allocated by market forces and because the accompanying high tax rates discourage productive behavior. A smaller state sector is one reason why the United States is more prosperous. Per capita GDP in the United States is more than 15 percent higher than it is in the Nordic nations. The gap is even larger when comparing disposable income, private consumption, and other measures that reflect living standards.

Notwithstanding problems associated with a large welfare state, there is much to applaud in Nordic nations. They have open markets, low levels of regulation, strong property rights, stable currencies, and many other policies associated with growth and prosperity. Indeed, Nordic nations generally rank among the world's most market-oriented nations.

Nordic nations also have implemented some pro-market reforms. Every Nordic nation has a lower corporate tax rate than the United States, for example, and most of them have low-rate flat tax systems for capital income. Iceland even has a flat tax for labor income. And both Iceland and Sweden have partially privatized their social security retirement systems.

The Nordic nations offer valuable lessons for policymakers, but they do not fit the traditional stereotype. Conservative critics correctly condemn the large welfare states, but often overlook the positive results generated by laissez-faire policies in other areas. Liberals, meanwhile, exaggerate the economic performance of Nordic nations in an effort to justify welfare-state policies, while failing to acknowledge the role of freemarket policies in other areas. 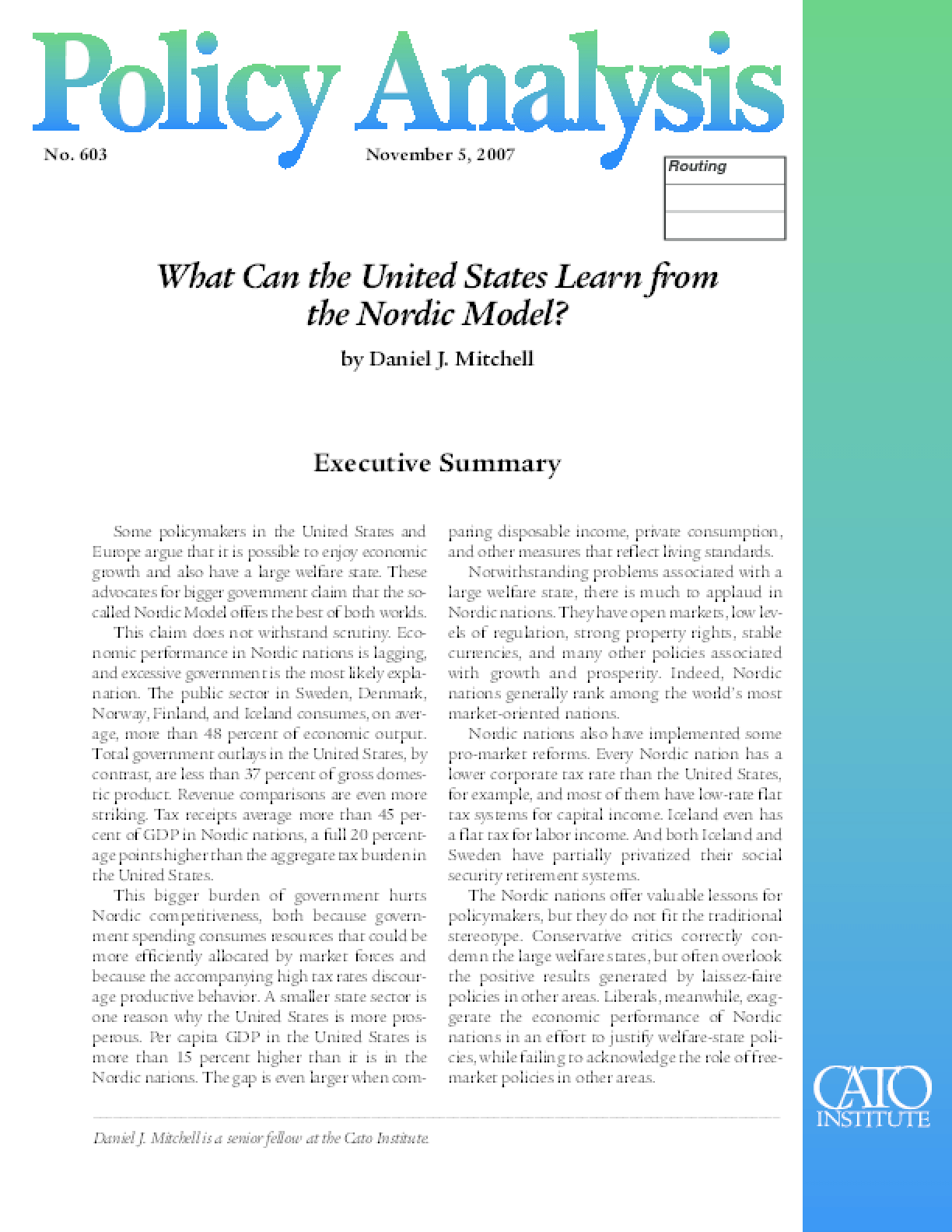